The Games are proud to host the EUSPBA Sanction
Pipe Band and Solo Competition for Grades Three, Four and Five.

These pipers are among the finest in the country. During competition play, you’ll see circles of them at various spots around the Games. Each drone – the long black pipes resting on the piper’s shoulder – has to be tuned to the other two drones and to the chanter, and then each set of pipes has to be perfectly tuned to the pipe major and then to every other set of pipes in the bands, and – well, it is extremely precise stuff, and that’s before they play the first note! The pipes are incredibly difficult instruments to play, and these guys and girls make it look easy. And sound wonderful.

Watch the competition circles. The only person allowed to move, except the bass drummer, is the pipe major. He/she will be tapping his/her foot for the beat, which changes several times during the competition set as they move from one type of tune to the next. And no sheet music to play from, because they don’t have enough hands – it’s all in their heads, hands and feet. They are all terrific musicians and you are invited to pick a favorite band.

See you Memorial Weekend Saturday in 2021!

As thrilling as the massed pipe bands and the pipe band competitions are, we also offer you the chance to experience a different type of pipe music. Long before pipe music was codified and written down for organized band playing, the lone piper in the wild Highlands learned haunting melodies from his father and his grandfather. You can hear some of these ancient tunes under the trees near the Cherrydale mansion.

Our solo pipers and drummers practice all year for these competitions – most, we hope, have understanding spouses – and it is a pleasure to listen to them strut their stuff. 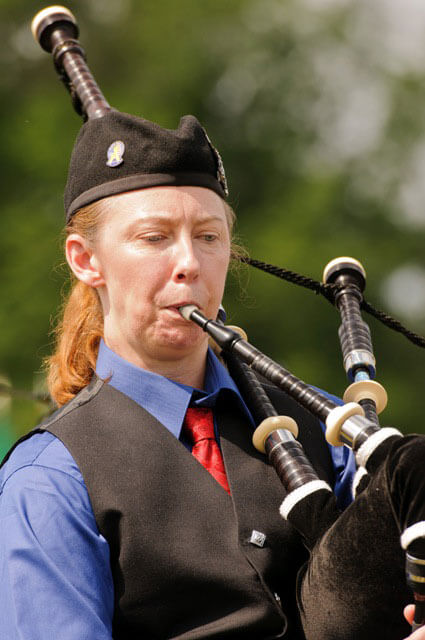